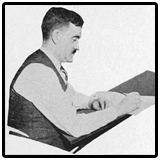 Born in Philadelphia, Hoban came from a newspaper family. His brother Edwin was with The Philadelphia Inquirer, and his father was the city editor and a political and editorial writer with the Philadelphia Public Ledger.

The young Hoban attended parochial schools and Saint Joseph's College, but he dropped out in 1907 to take a job at Philadelphia's North American newspaper, as he recalled, "There I made borders for pictures of the 'murdered man' et al. I drew the borders and the ads so carefully that they made me sporting cartoonist, and I was allowed to see the ball games free. This lasted until late in 1913 when the call of N.Y listened good. Then I joined the Hearst's collection of trained pencil pushers—and have been gaining weight every since."

In 1913, invited to New York by Arthur Brisbane, he became a sports cartoonist at the New York Journal. Later that year, he was given only a weekend to devise a comic strip, and he created Jerry on the Job, about pint-size Jerry Flannigan, initially employed as an office boy and then in a variety of other jobs. The strip was launched on December 29, 1913.