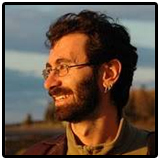 Stefano Turconi was born in 1974. He attended artistic high school in Busto Arsizio and went on to study sculpture at the Brera Academy of Fine Arts, as well as illustration and comics at the Scuola Superiore d’Arte Applicata del Castello Sforzesco (Sforzesco Castle Senior Comprehensive School of Applied Arts) and finally comics at Milan’s Disney Academy.
Stefano has collaborated as a freelance comic artist with Walt Disney Italia since 1997, working on stories for Topolino, Giovani Marmotte, PK, MM, X-Mickey, W.I.T.C.H., Minnie, and many other magazines.
He authored the following comic books for the French market, together with comic writer Giovanni Gualdoni: Akameshi (published by Soleil), Fantaghenna (published by Paquet) and Wondercity, a bimonthly series published in Italy by Freebooks and in France by Soleil.
From 2000 to 2006, he taught illustration at the Sforzesco Castle School and comics at the Disney Academy.
He has collaborated with Edizioni Piemme since 2005, illustrating various book series, such as Gol!, Microspie and Cronache del Regno della Fantasia. He has also illustrated the Avventure allo Zoo series and the book “Storie di Animali” for Edizioni EL, as well as the book “Vado in Senegal!”, a responsible tourism guide and travelogue for Terre di Mezzo Editore.
Since 2007, he has written issues for the comics course “Disegnare, scrivere, raccontare il fumetto” (Drawing, writing and narrating a comic) with comic writer Alessandro Sisti, published for distribution through Italian newsstands by De Agostini Publishing in collaboration with the Disney Academy.
Turconi has also illustrated the A school for Pirates series for De Agostini since 2008.